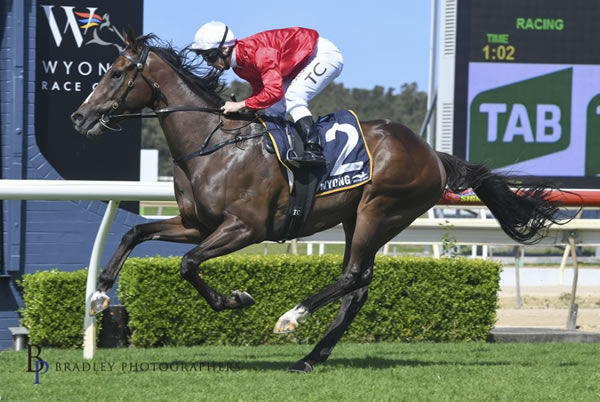 A horse that Gai Waterhouse considers “one of the most talented 3YOs racing in Sydney”, 3YO Belieber (Zoustar), heads an impressive line-up in the Inglis Digital December Online Auction, which is now open for bidding.

The progressive gelding is lightly-raced having had just four career starts, including a tough 4th on debut as a 2YO in the G3 Breeders’ Plate, despite racing wide and without cover, plus an impressive all-the-way victory at Wyong last month over 1100m, where he clocked 33.18 for the last 600m.

His last start effort on December 4 saw him carry top weight when finishing 0.2L second to talented Godolphin 3YO Tiny over 1100m on the Kensington track in a field made up exclusively of winners.

Belieber, who is qualified for Hong Kong under a PP Permit, has been fully vetted in accordance with HKJC guidelines with information accessible through the Inglis repository.

“He is a natural speed horse and being a gelding makes him an attractive racing prospect ” added Waterhouse of the gelding who is fully paid-up for the Magic Millions Race Series and is offered in the December catalogue by Gai Waterhouse & Adrian Bott Racing.

To view a promotional video of Belieber, CLICK HERE.

Belieber is one of 265 entries for the Inglis Digital December Online Sale, which also includes a draft of 21 unreserved yearlings from Kooringal Stud with progeny by Epaulette, Duporth, Magic Albert, The Brothers War, Impending and Super One.

The draft has comprehensive parade videos, photos and comments from the Inglis Bloodstock team.

To view a preview video of the Kooringal draft, CLICK HERE.

The bumper December catalogue includes other highlights such as:

• Cerebellum – Daughter of Fastnet Rock and Encosta de Lago Stakes winner Dizlago, from the family of Dizelle and Pinot, offered in foal to Dundeel

• War Flag – 3YO Snitzel gelding and $650,000 yearling, maiden from one start with Snowden Racing

• Niccovi – Talented winner of over $248,000 with multiple stakes-placings to her name, including in G3 company at Flemington

• Naval Warfare – Stakes-winning 7YO gelding and a runner-up at Flemington on Melbourne Cup day, offered by Anthony Freedman Racing as a flat or jumps racing proposition

• Chief Ironside 2.5% Share – G2 winner at WFA level, being aimed at Stakes races during the autumn

• Manaajim – 3YO Lonhro filly out of Stakes-winning mare Tawteen, placed in four of five starts and offered by Lindsay Park Racing.

The December Online Auction is the final sale of the year for the Inglis Digital platform, which has enjoyed an enormous 12 months recording $49.3 million in turnover so far plus a landmark G1 victory for $22,500 graduate Bella Vella in the Robert Sangster Stakes.