Born & Raised: Cherry Tortoni a blast from the past and future Classic prospect

Visions of 12-times Group 1 winner Tie The Knot and the exceptional race filly Whisked came flooding back at Flemington today when the Paddy Payne-trained and Billy Egan-ridden Cherry Tortoni (by Night of Thunder) turned in a hugely promising performance to land the $100,000 VRC Rod Johnson Handicap (1400m) at the metropolitan meeting in Melbourne.

Carrying the unmistakable colours of the Tait family, Cherry Tortoni stamped himself as a significant 3-year-old prospect for next season with a very impressive victory over the metric seven-furlong distance, maintaining an unbeaten record in a fledgling racing career now ready to take off. 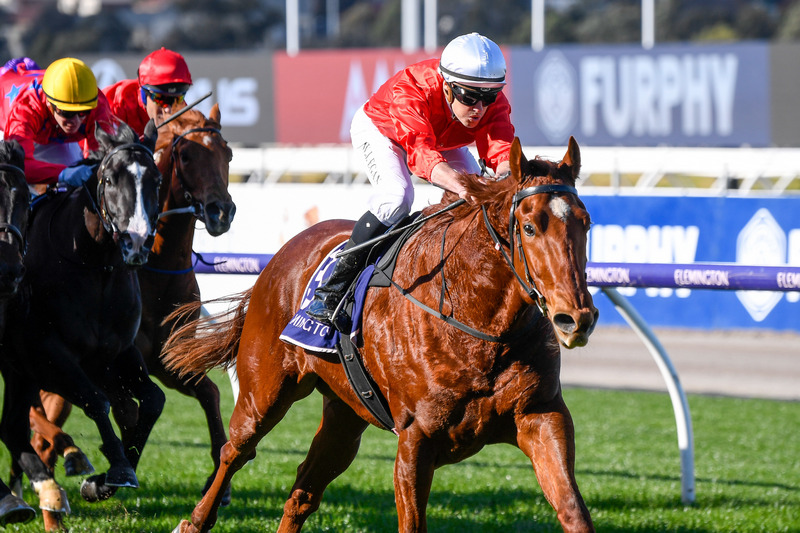 Having only his second start after winning comfortably at Sale on debut, Cherry Tortoni sat deep in a 14-horse field before seizing complete control of the contest in the straight, careering away to a clear advantage over the final 250 metres to win in the style of a potential black-type performer.

In a contest comprising a bunch of late-maturing 2-year-olds with untapped potential, Albarado (NZ) (by Savabeel) did best of the rest to finish runner-up, in advance of Insaaf (by Pride of Dubai) in third.

Speaking on behalf of the connections after the race, winning jockey Billy Egan remarked: “I think he’s going to be a pretty handy horse for the future.

“I was happy coming around the corner on him. We had the options to come around the outside and work over the top of them, so it worked out well for us.”

If anything, Egan’s summation of the race was slightly understated. Cherry Tortoni looks to have the latent talent of a very useful performer as well as the pedigree to develop into a genuine 3YO Classic contender.

Mention of Whisked and Tie The Knot, distinguished standard-bearers for the Tait family in decades gone by, is totally relevant when it comes to Cherry Tortoni. Whisked is the gelding’s 2nd-dam and produced none other the great Tie The Knot, in addition to a couple of other notable stakes winners.

Cherry Tortoni’s breeding is also very notable in terms of his maleline too, as the youngster is the latest member of the first local foal crop of shuttle stallion sensation Night of Thunder to leave a significant impression on the current domestic 2-year-old ranks.

In the hands of Paddy Payne, an acclaimed horseman who registered his 100th win for the season with today’s success, and at an exceptional strike-rate of around 20 percent, Cherry Tortoni has his biggest days in racing firmly waiting ahead.

Official margins of the race were one-and-a-half lengths by three-quarters of a length.

Cherry Tortoni’s two wins from two starts have netted his owners, Mr O P Tait & Mrs J G Nivison, the sum of $72,325 — with much, much more in the offing.