Exciting two-year-old Cherry Tortoni kept his record at a perfect three for three in Saturday’s Listed Taj Rossi Final (1600m) at Flemington however the son of Night Of Thunder (IRE) was made to fight for it. 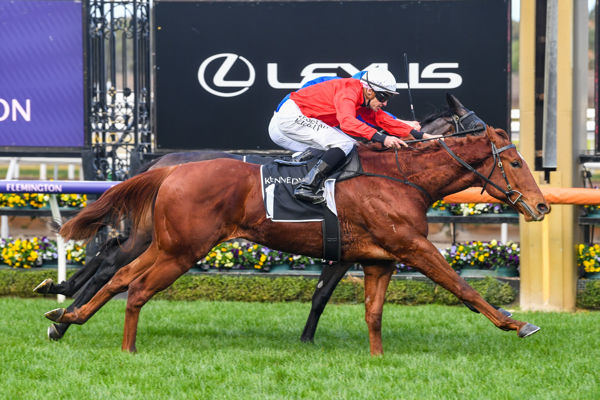 Carrying top-weight of 61kgs, Cherry Tortoni settled well back in the field by Billy Egan who was forced to sit patiently in the straight before securing a run when John Allen made his move on Godolphin’s promising  Teofilo (IRL) colt  Alcyone.

Cherry Tortoni looked set for an easy win when quickly gathering in Alcyone but with a 4.5 kgs pull in the weights the son of the dual Group 1 winner Purple rallied strongly to go down by a short-head.

The 2yo Tavistock gelding Johnny Get Angry, trained by AFL legend Denis Pagan, was one and three-quarter lengths back in third. 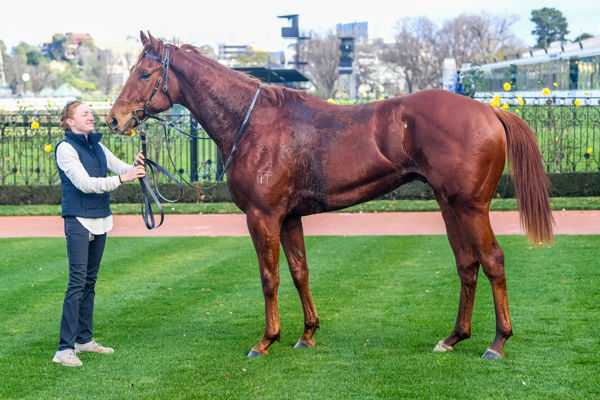 The Patrick Payne-trained Cherry Tortoni advances his record to three wins from as many starts with earnings of $145,525.

“He’s a lovely horse to deal with, so are the owners,” Payne told Racing.com.

“When Sandy Tait sent him to me he said this is one of the nicest horses I’ve sent down.

“He could be a Derby horse, but I’ll be guided by him. I’m not sure how good he’d be against the smarter three-year-olds over 1200 or 1400 metres so I’ll give him short break and look to an early spring mile race.

“He gave weight to the second horse (Alcyone) so I think that might’ve been a difference towards the line finish, but he went really well.

“He’s a big horse so I can’t go too easy with him, so he’ll just have a short break.”

One season shuttler Night Of Thunder (IRE) has enjoyed a wonderful year worldwide.

ry Tortoni becomes his 15th stakes-winner and his third in Australia from a crop of just 58 live foals.Carrying the familiar red with white cap silks of Sandy Tait and Jill Nivison, Cherry Tortoni is out of the Strategic mare Tortoni (Strategic) who is a half-sister to the 13-time Group 1 winner Tie The Knot (Nassipour) who banked $6.2 million when trained by the late Guy Walter.

Also, a half-sister to the Listed winners Hood (Shamardal) and Dream Ballad (Singspiel), Tortoni is the final foal of the Group 1 VATC One Thousand Guineas heroine Whisked (Whiskey Road).

Tortoni was not up to the class of her siblings on the track winning just a maiden at Wagga from four starts.

The daughter of Strategic has a weanling filly by Churchill (IRE) and was covered last spring by Mendelssohn (USA).