The Breeders’ Plate might only carry Group 3 status but to champion trainer Gai Waterhouse it’s one of the most important races on the calendar. 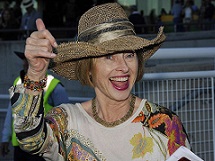 Two-year-old racing is a passion, almost an obsession, for Waterhouse that was sparked by a few words from her legendary father, TJ Smith, just a few days before he died in September 1998 that she didn’t know how to train the youngsters.

Three weeks later High Rolling won the first of six Breeders’ Plates so far, including four straight between 2011 and 2014, and Waterhouse will chase a seventh at Randwick on Saturday with Belieber and Postcode making their debuts.

“What dad said made me focus. He passed away four days later so that’s why it stayed in my mind,’’ Waterhouse said.

There are countless photos year after year of Waterhouse touring studs and yearling sales looking for the next star two-year-old.

And she’s had a few – going back to the likes of Dance Hero, Excellerator, Assertive Lad, Pierro, Overreach, Vancouver to name a sample.

“I see them all the time and I know what works and what doesn’t work,’’ she said.

“It’s what Australian racing is all about, it’s about speed, it’s about precocity. Look at all the stallions standing at stud, a lot of them are Golden Slipper winners.’’

Three of the six Breeders’ Plate heroes to come out of Tulloch Lodge under her care have gone on to win the Slipper, the latest of them Vancouver in 2014/15, and Waterhouse and co-trainer Adrian Bott have high hopes for the class of 2019/20.

Waterhouse may not be prone to huge statements these days but is expecting Belieber and Postcode to make their presence felt in the Group 3 $160,000 Arrowfield Breeders’ Plate (1000m).

“We have a lovely group of two-year-olds, I think Vancouver stamps his progeny remarkably well,’’ she said.

“We have about 10 Vancouvers in the stable and they are exactly the same. They get on with the job, they’re lovely types of horses and easy to have anything to do with.

“Postcode is by Vancouver and he was just a standout at Glenlogan Park Stud, he was such a good looking colt I can’t tell you.

Postcode ran second in his heat at the official trials on the Kensington track on September 23, hitting the line strongly at the end of 847m.

Belieber wins a trial at Randwick on September 23

Stablemate Belieber, by Zoustar, led all the way to win his trial and Waterhouse says he’s a natural two-year-old.

“He’s a very smart and very sharp colt and he’s the horse to beat in the Breeders’ Plate,’’ she said.

“Ollie Tait couldn’t sell Belieber and I liked him at the sales, he very kindly sent him to Adrian and me to train. Right from day one he’s always been a precocious horse.’’

Waterhouse doesn’t have the same imposing record in the Gimcrack Stakes for the fillies and the stable doesn’t have a runner in Saturday’s race.

But she said to keep an eye out for a Zoustar filly called Twilight Affair who will make her debut later this month.