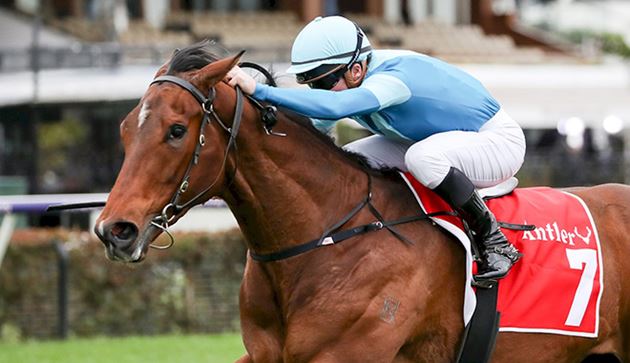 Crosshaven ($9) raced outside the leader Bartley ($4.80) and the pair controlled the tempo of the race before Crosshaven dashed home better to score by 1.5 lengths.

“It was a super run today and stepping up to 1400 metres was a big key,” said winning rider Daniel Stackhouse.

“He just had a chance to travel for a bit longer before I had to go for him. He’s still a big, raw gelding so he’ll take great benefit from today, I think.

“The plan was to take our time and get him into a really good rhythm. You can see that he’s still not stretching out a hundred per cent, still learning what he’s doing.”

Crosshaven won both two-year-old starts and then finished sixth, beaten a length, when he was tightened at the winning post resuming in the Group 3 McNeil Stakes (1200m) at Caulfield a fortnight ago.

Ben Hayes, who trains Crosshaven in partnership with Tom Dabernig, confirmed their intention for the Smart Missile gelding to be prepared for the $2 million G1 Caulfield Guineas (1600m) on October 10.

Both Crosshaven and Aysar will have their next start in the $200,000 G3 Caulfield Guineas Prelude (1400m) on September 26. Crosshaven is a $15 chance to emulate Long John in 2013 in completing the Exford Plate and Caulfield Guineas double, while Aysar is a $17 hope within the market.

Dabernig and Hayes have trained five Melbourne winners this season, four of them new-season three-year-olds.

Cherry Tortoni ($5.50) was best of the swoopers in third, an obvious eye-catcher first-up after ending last prep by winning the Listed Taj Rossi Final (1600m) at Flemington in July.

Mick Price had three runners in the Exford Plate, a race he won with future G1 winner Tavistock in 2008, with maiden Ironedge ($15) his highest-placed finisher in fifth.

National Choice ($17) never entered the call after going back from his wide barrier when 10th of 11 while Immortal Love ($3.70 favourite) was eased down by rider Craig Newitt and finished last, the only horse that didn’t break 11.9 seconds for their final 200m, which underlined the sit-sprint tempo of the race.