Ethan Brown believes Duke Of Neworleans (by Hallowed Crown) has plenty to learn despite winning his 1212-metre Geelong maiden on debut by eight lengths on Tuesday. 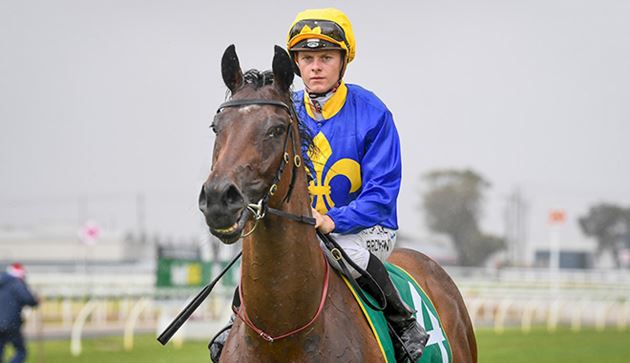 Brown had partnered the Matt Laurie-trained Duke Of Neworleans in trackwork prior to his first race-day experience, where he proved a handful.

“Geez he’s green,” Brown said of the three-year-old gelding. “Going to the barriers he was shying at everything. He’s a pretty forward sort of horse but he’s got a lot of upside.”

Duke Of Neworleans ($1.65 favourite) was far more professional when the gates opened, settling in the lead and assuming control of the race before bounding clear inside the final 200 metres on the Heavy 8 track for the easiest of wins.

“He has a nice big action on him and he’s got plenty more wins in store,” Brown said.

“He didn’t get through the (Heavy) going too bad but in saying that, I think he’s just a nice horse, wet ground or dry ground won’t worry him too much.”

Duke Of Neworleans, who was withdrawn from the 2019 Inglis Melbourne Premier Yearling Sale, is by Hallowed Crown out of Encosta de Lago mare Page Three Girl, who is the dam of metropolitan winners Magic Sight and Puckapunyal.

2019 C.F. Orr Stakes winner Manuel holds the record for the biggest maiden victory at Geelong since 2007, winning his fifth start over 1112m by 10 lengths under Kerrin McEvoy as $1.14 favourite in November 2016.