A blinkered Churchill (Smart Missile) regained his dynamic turn of foot to claim the S$70,000 Class 3 Division 2 race over 1200m on Polytrack yesterday. 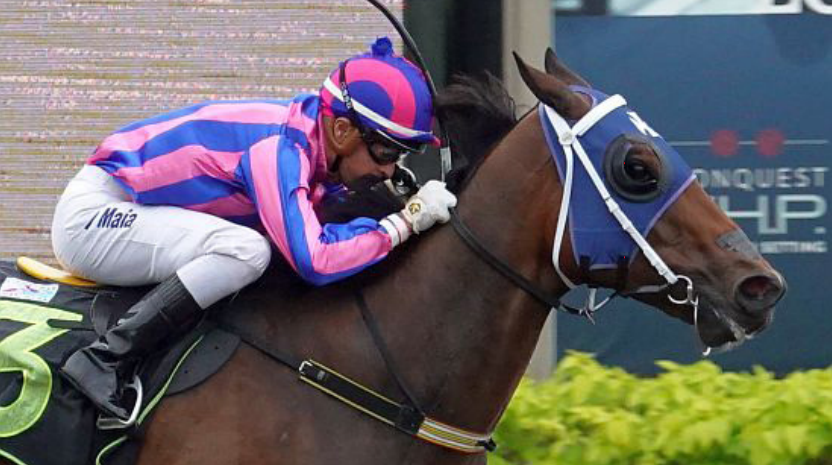 Smothered up in fourth place for his charge to the post, Churchill, who was backed down to S$14 favouritism, gave his rivals little chance of a response once he was produced by first-time
partner Ruan Maia at the top of the straight.

Among the leading bunch throughout, Super Invincible (I Am Invincible) still had a kick left in him into the straight, mounting a stiff resistance when Churchill came upsides, but the latter eventually gathered him in to assert his superiority with a smart length and a quarter win.

Mr Hooper (Sham Express) was produced late to finish third another half-length away. The winning time was 1min 10.55secs for the 1200m on Polytrack.

Churchill was bringing up his third win in eight starts, breaking a mini run of outs – two unplaced runs, including one in his target race, the Singapore Derby (Gr 1, 1800m) in September. The five-year-old’s first two wins were recorded for Steve Levar and he has now saluted for his new owner Guy Shirtliff at only his second start for the South African, toting up close to S$125,000 in stakes earnings. That figure gets a chance to swell further – as early as next Sunday in the S$250,000 EW Barker Trophy (Gr 2, 1400m).

“I’ve nominated him for the EW Barker Trophy next Sunday. We’ll see what he gets, but most importantly, we’ll see how he pulls up first,” said winning trainer Ricardo Le Grange.
“It was a great ride from Ruan Maia and the blinkers really helped him today.”