Shrewd Shopping for Clothing by Boomer at the Magic Millions

Scheduled to go under the hammer at the 2017 Magic Millions national Broodmare Sale, the Commands mare Clothing was offered a last minute reprieve by Godolphin when her daughter Raiment (Street Cry) won the Group III Birthday Card Stakes followed by a defeat of  Invincibella in the Group III James Carr Stakes.

Three year’s later Clothing did make the trip to the Gold Coast where Craig Rounsefell’s Boomer Bloodstock was Johnny-on-the-spot shelling out $90,000 for the daughter of Commands who carried a positive test to Shooting To Win.

It has not taken long to prove what a wonderful decision that has been.

When Godolphin initially considered selling Clothing she was carrying a colt foal by Hallowed Crown.

Named Fatigues, the now three-year-old gelding won his second race from his last three starts when finishing best under Damien Oliver over an extended 1400 metres at Flemington on Saturday.

Shortly after Clothing racked up an interstate double when the lightly raced four-year-old Shooting To Win mare Tailleur took her record to three wins and a second from four starts with a runaway win over 1200 metres at Rosehill. 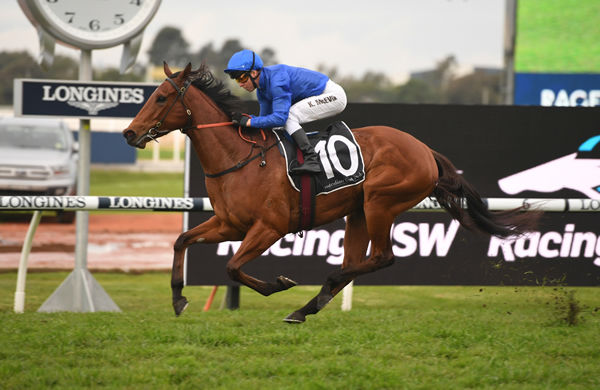 Now, Shooting To Win hated the wet, but Clothing revelled in it and Tailleur clearly takes after mum.

With Kerrin McEvoy in the saddle Tailleur won by a widening three and three-quarter lengths.

The James Cummings-trained mare is racing in such fine form a black-type win is not beyond her.

I had a lot of admiration for Clothing. She won her maiden at Eagle Farm in two starts for John Hawkes and continued to race honestly for Peter Snowden winning a further five times with two wins apiece at Randwick and Rosehill and one at Canterbury.

She was only asked to compete in three stakes races in the latter part of her career coming closest when fourth in the Group III Bellmaine Stakes at Caulfield although she did contribute a quarter of a million dollars to the Darley coffers.

Clothing’s dam Rompers (Grosvenor) is a half-sister to two stakes-winners led by the Dr Grace colt Over who denied the great Sunline of three wins in the Group 1 ATC Doncaster Handicap.

Clothing has proven to be a very reliable producer and you would think she has a few more good years in her left. She has a 2yo Street Boss (USA) colt named Metzingen in training with James Cummings.

Her $429,585 earner Raiment will be given every chance by Godolphin. She has a yearling colt by Astern but was not covered last spring.