Sky Sports Racing’s Alex Hammond catches up with Tom Marquand and Hollie Doyle and asked them both for a horse they are looking forward to riding when we get back racing.

Hollie picked one from the Archie Watson stable called The Perfect Crown. He’s by an Australian stallion called Hallowed Crown who is best known for being the sire of Colette, the recent winner of The Australian Oaks on the same card that Addeybb won the Queen Elizabeth Stakes recently. The Perfect Crown is the best of his European-trained progeny and according to Hollie could be really smart this year.

She was on board for his only start at two where he won easily at Chelmsford and then was reunited with him when he returned at Lingfield at the end of February to be a promising third in the listed Spring Cup. The race at Lingfield didn’t really go to plan, but Hollie said he’s a horse they are looking forward to running on the turf.

After an exceptional 2019, @HollieDoyle1 is hoping the Group winners start coming once racing resumes in 2020 – and @TomMarquand does too! 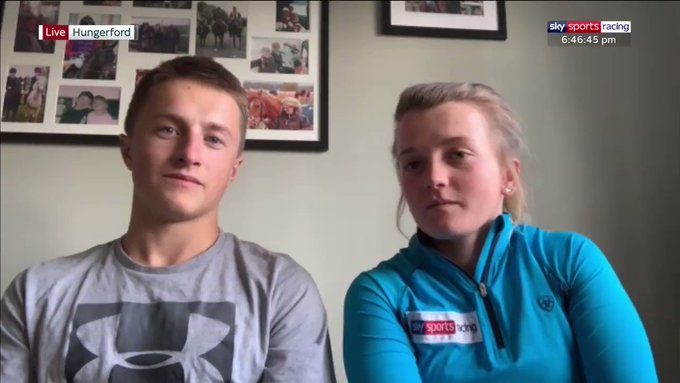 Tom went for Born With Pride who is trained in Newmarket by William Haggas. She’s a filly that holds entries in the 1000 Guineas and Irish Oaks, which shows the potential her connections hope she has. She won at 20/1 on her debut in a mile listed race at Newmarket back in November on heavy ground and Tom said she’s a filly with an impeccable pedigree who is gorgeous looking and should get a trip.

So maybe we won’t see the best of her until she races over middle distances, but it seems she is expected to be very smart. Incidentally, Tom is still 7/1 with Sky Bet to be champion jockey this year, he’s keen to win it too.

Another famous face I interviewed on Sky Sports Racing was Rab Havlin who gets to sit on some unbelievable horses at John Gosden’s Clarehaven Stables.

Unsurprisingly he could have given me an endless list of equine talent, but narrowed it down to two unexposed types. One horse he’s looking forward to seeing run in 2020 is a filly that only ran once in 2019 and didn’t win a race. Her name is Frankly Darling and as her name intimates, she is a daughter of the mighty Frankel.

She should be another filly with stamina to burn with a stout pedigree on both the sire and dam side and she showed plenty of promise to be second in a mile maiden at Yarmouth in October, with her inexperience costing her that day.

The other horse he highlighted was Encipher, a Siyouni colt owned by Godolphin. He has already shown he’s pretty useful with a win on his second outing at Newbury. He was sent off favourite that day having shown promise at Haydock on his debut and is another horse with a classic entry (2000 Guineas) so more is expected of him. Who knows where we will see these horses in action, or when/if/where the classics will be run, but regardless of that, they are horses to put in your tracker.
Section of article courtesy featured on Sporting Life.