Shortly after the Denman mare Humma Humma came from the tail of the field to win the Listed Alinghi Stakes (1100m) at Caulfield, (read that story here) Godolphin’s 5yo Denman gelding Deprive repeated the dose in the $500,000 Group III Sydney Stakes (1200m) at Randwick.

Deprive has yet to be beaten in six starts at Randwick but he was made to work for this one coming from well-back under Hugh Bowman to edge out the remarkably consistent Not A Single Doubt mare Champagne Cuddles by a long-head with the short-priced favourite Brutal (O’Reilly) a short-head back in third. 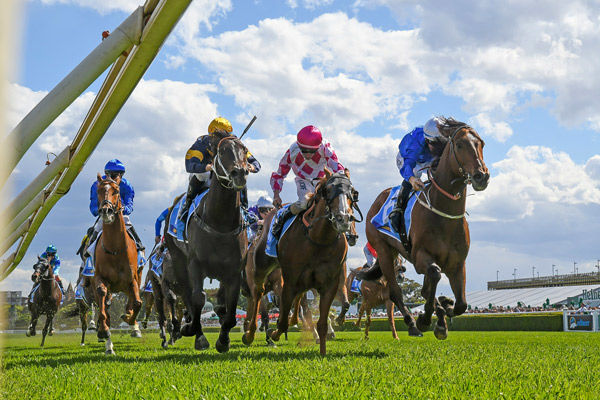 Deprive flashes down the outside

Winner of the Listed June Stakes and Group III Show County Quality at Randwick, Deprive advances his record to 7 wins, 2 seconds and 1 third from 12 starts with earnings of $478,730.“He threw his head to the side and I didn’t come out on terms. He was going to be well back but I may have been a bit closer had he not done that,” Bowman said.

The Godolphin homebred is the best of two winners out of the Canny Lad mare Defrock who was sold by Darley to Middlebrook Thoroughbreds for $22,000 at the 2015 Magic Millions National Broodmare Sale.

A sister to Up And Coming Stakes winner Blackhall, Defrock has a 2yo Star Witness colt named Yulong Defence who was consigned by Noogee Park to this year’s Inglis Classic Yearling Sale where he was knocked down to Yu Long Investments for $400,000.

From the family of triple Group II winner Hosannah, Defrock has a yearling colt by Foxwedge and was covered by Hellbent last spring.

Former Darley resident Denman (Lonhro – Peach by Vain) stands at Twin Hills Stud, Cootamundra for the 2019 season at a fee of $8,800 (inc GST).