There’s not much in Australian racing that Godolphin hasn’t won and on Saturday at Rosehill, the worldwide racing powerhouse added the $7.5 million Golden Rose to its trophy cabinet as Colette (Hallowed Crown) rocketed to victory. 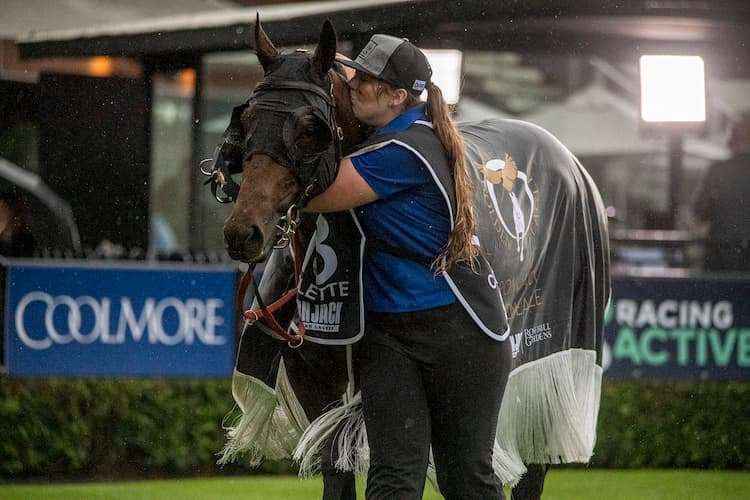 Godolphin mare Colette scored her first win since taking out the G1 Australian Oaks in the Autumn as she stormed down the middle of the Rosehill track to take out the second running of the $7.5 million Golden Eagle.

Trained by James Cummings, the mare settled well back in the field under young jockey Koby Jennings and peeled to the outside of the field in the straight and ate up the ground to score a narrow victory.

The Brad Widdup-trained Icebath (NZ) (Sacred Falls {NZ}) produced a career-best run to finish second, while Dawn Passage (Dawn Approach {Ire}) was 0.8l away in third after hitting the front in the straight but fading in the final stages of the race.

Cummings was full of praise for his mare who he had freshened up for the race after running well in the G1 Epsom H. at her previous start.

“She is a super mare,” the trainer said. “What a wonderful performance from her to be kept fresh.

“We had a plan for this Spring Carnival, we wanted to keep the speed in her legs. She freshened up beautifully since the Epsom where she got beaten by 2l, so we spoke to the boys on Monday and credit to them, they gave me the green light to go ahead and run them over a distance.

“We had a plan for this Spring Carnival, we wanted to keep the speed in her legs. She freshened up beautifully.” – James Cummings

“Anyone with a pencil in their hand can work out it was too short. She ended up finding a way on the heavy track and we got the solidly run race we hoped for.”

Cummings also likened the mare to her sire Hallowed Crown and said he gave Jennings the confidence to settle back in the field and use Colette’s impressive turn of foot.

“I just said let the race unfold from the half-mile like it was a mile and a half race and she will eat up the ground late,” he said. “He kept his head and she savaged the line.

“She looked like Hallowed Crown there in the last 100 metres.”

Collete was bred by Godolphin and Cummings said it was an overall terrific result for the operation.

“I tell you something this farm has just the most amazing record,” he said. “This crop of horses now have been reared to win the Golden Gift, the Golden Slipper, the Golden Rose and now the grand slam of the Golden Eagle. I mean it was just going to happen.

“You have got to remember it all starts somewhere. Guys like Johnny Sunderland, Barley (Ward-Thomas), James (Manning) at Northwood Park, Jason (Walsh) goes and checks these horses all the time. They don’t come out of nowhere.

“You have got to remember it all starts somewhere. Guys like Johnny Sunderland, Barley, James at Northwood Park, Jason goes and checks these horses all the time. They don’t come out of nowhere.” – James Cummings

“We get some of the kudos but what amazing horses. The time-honoured races we have won with them.”

A career-best result for Jennings, he thanked Cummings for the giving him the ride but said he couldn’t believe he had won.

“Thanks to James Cummings and all the Godolphin team,” the jockey said. “Putting me on a beautiful little mare like this, she is the hardest trying horse I’ve ever sat on.

“I’m lost for words. I’m glad to get the job done.

“If you told me to look at the photo I couldn’t do it. Everybody looked at me and said I think you’ve won. I don’t really know how to put it all in.”

The dam of Colette is Libretto (Ire) (Singspiel {Ire}), who was unraced but comes from a quality black-type family.

Libretto is the dam of six winners from seven foals to race, and Colette is now her second stakes winner. Metastasio (Street Cry {Ire}) won the Listed MRC Chairman’s S. and placed in the G3 Quezette S.