Like most of the breed, the 3yo Hallowed Crown colt Vilana loves a rain affected track and he found conditions to suit in Saturday’s Listed Bisley Workwear South Pacific Stakes (1400m) at Randwick. 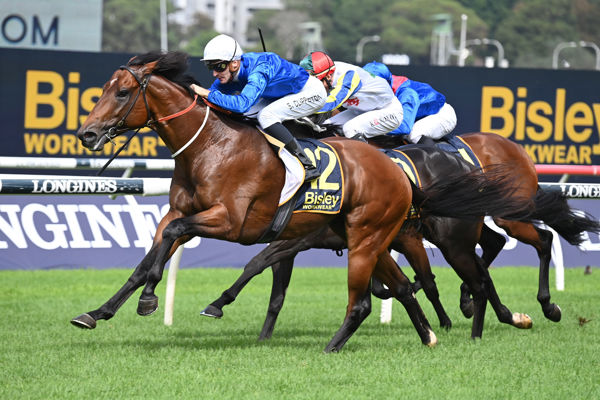 Ridden by Sam Clipperton for trainer James Cummings, Vilana stayed on strongly to defeat the Lonhro colt Loch Eagle by three-quarters of a length with the Snitzel colt Bend The Knee the same distance back in third.

The Godolphin homebred was making his first start since breaking his maiden at Sandown last August.

Vilana is the third stakes winner for the Redoute’s Choice mare Retsina following Savatiano and Athiri.

A multiple Group II winner, Savatiano was stripped of a Group 1 in the Canterbury Stakes following a positive test.

The daughter of Street Cry (IRE) was covered by Lonhro at her first season at stud.

The daughter of Lonhro was covered by Street Boss (USA) at her first season at stud.

Retsina is a daughter of the Group 1 winner Star Shiraz who was a $1,125,000 purchase by Godolphin from the 2007 Magic Millions National Broodmare Sale.

Retsina’s 2yo Lonhro colt Rakomelo was runner-up to Best Of Bordeaux in the Group III Canonbury Stakes at Rosehill in January.