Hot King Prawn (Denman) washed away months of frustration and doubt with an emphatic performance to claim his first Group 1 title with victory in yesterday’s Centenary Sprint Cup (Gr 1, 1200m). 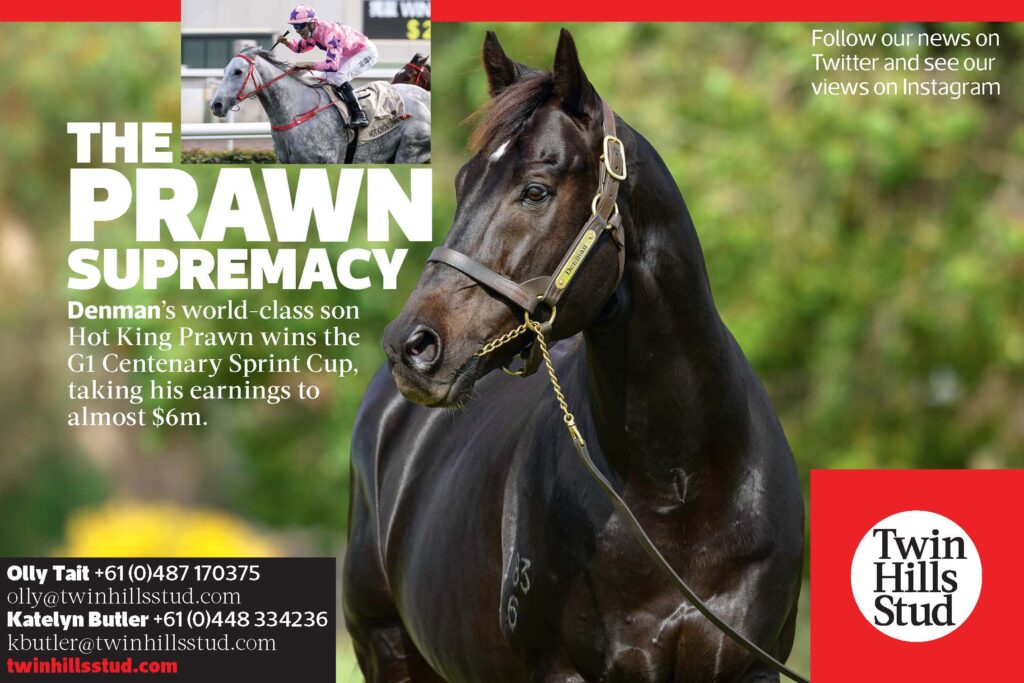 Placed three times at elite level, the enigmatic grey delivered in copybook style for Joao Moreira to provide trainer John Sjze with his fourth consecutive triumph in the feature, having previously won with D B Pin (Darci Brahma) in 2018 and Beat The Clock (Hinchinbrook) in 2019 and again last year.

Regency Legend (Pins) charged from well back in the field to snatch second, a length and three-quarters behind the easy winner and just a head in front of Big Party (Exceed And Excel),
who filled third spot.

Having nursed Hot King Prawn back from life-threatening colic in 2019, the sight of the steely grey cruising to clear-cut victory after stalking the speed set by Voyage Warrior (Declaration Of War) brought immense satisfaction to Size, who continues an irresistible mid-season surge.

“There was some frustration previously that he hasn’t won a Group 1 but in fairness he has run into some very smart horses in the last two or three years,” Size said, referring to the
gelding’s previous six Group 1 attempts. “He was able to do his best today.”

“You couldn’t have written the script any more perfectly and Joao did exactly what was expected and so did the horse and he had an easy win.

“He always gives his best.” Winner of nine of his first ten starts in Hong Kong, Hot King Prawn underwent colic surgery in 2019 amid doubts he would ever return to the track.

“When (veterinarian) Paul Robinson operated on him for the surgery, it was a case of ‘Will he come back at all?’” Size said. “I ran him ten months after that and he ran well the first day, he ran well the second day and he’s run well ever since.”

Moreira was jubilant post-race. “Good horses make a jockey’s life much easier and no doubt this bloke made my job easier today,” he said. “He’s just done everything so professionally and, of course, we had a smooth run through, but I’ve got to highlight that John has got this horse to be so consistent – only champion trainers can do that. “Riding for him is a pleasure. It’s no surprise he won today. I thought today would be his day because circumstances would be in his favour.

“The horse has given himself so much chance, performed so many times but he hasn’t got there, but today was the day. “It’s a great success. He gave us the feeling that he was capable but, unfortunately, he took a little long. “This horse is very straight-forward, very sound and I could not ask for a better horse today.

“He won today and the best thing is that I believe there is more to come from him.”