Industry a Belieber in Digital, as Inglis cracks $50 million 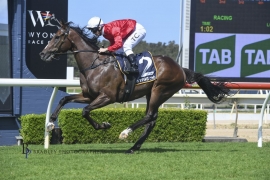 Inglis Digital has concluded an astonishing year with the December Online Auction smashing the $50 million barrier for overall turnover in 2020 and recording the sixth consecutive top lot to make $200,000 or more.

Exciting 3YO Belieber (Zoustar) – an impressive Wyong winner last month – was the headline act in the December catalogue and topped the sale at $300,000, purchased by Tory Lavalle of ML Stables.

Lavalle and his family are chasing the G1 dream to honour the memory of Mick Lavalle – Tory’s brother – who died suddenly in 2014 at just 50 years of age.

“My brother raced horses for more than 30 years, many with Kembla Grange trainers, and the family want to continue his legacy,” Lavalle said.

“Our aim is to win a G1 in his honour, so we are in the process of building up ML Stables at Kembla Grange with trainer Anthony Mountney.

“We’d like to have 16 in work at all times but with a few babies still to come through, it’s exciting to be starting the new year with a horse like Belieber who is already racing and looks very progressive.

The gelding was offered by Gai Waterhouse & Adrian Bott Racing and raced in the famous Tait family colours of red with a white cap.

“It’s great to see Belieber top the Inglis Digital December Sale and I think he will provide plenty of enjoyment and a lot of success for his owners,” Waterhouse said.

Olly Tait – who described Belieber as a lovely horse – was full of praise for the Inglis Digital platform, which he has used several times in the past.

“Extremely happy with the result, I certainly thought the horse had every opportunity in that he was exposed to buyers the world over.

“Inglis’ promotion was excellent, the promotional video was fabulous and the work the Inglis team did is very much appreciated,” Tait said.

At sale’s end, the December Online Auction grossed $2.64 million which pushed the 2020 turnover to just shy of $52 million, plus a clearance rate of 81%.

Kooringal Stud sold 20 yearlings for a total of $243,250, with their Duporth x Miss Cacciatore colt one of three purchases for Ciaron Maher from their draft.

“Ciaron was here today to inspect all the yearlings and we’re really happy to see these colts and fillies go to trainers nice and early and be given every opportunity which is important for some of our young broodmares,” Stuart Lamont said.

“We had several sell for more than expected and it’s all about averages for us, so overall we’re very happy.”

Three other lots sold for six figures – they were multiple Stakes placed mare Niccovi (Nicconi), who was purchased by Telemon Thoroughbreds for $185,000, Bob McKay paid $150,000 for Fastnet Rock mare Cerebellum, carrying a positive to Dundeel and Star Encounter (Jeune), the dam of three Stakes winners, was snapped up by Ferguson Bloodstock for $105,000.

As the clock hit zero on the final lot in the December catalogue, Inglis Digital Business Manager Nick Melmeth had a chance to reflect on the standout 2020 moments for the platform.

“It’s been immensely satisfying to see the growth of Inglis Digital from a fledgling monthly online sale, to become a trusted and popular avenue for people to trade stock – and the quality of horses continues to raise the bar,” Melmeth said.

“But even more rewarding, is seeing the new owners enjoy success on the racetrack. When Digital graduates win four of seven races at Orange on Monday, we as a team will celebrate it as much as reading about a winner in Macau or a $135,000 graduate like Dance winning in town.”

“We’ve forged relationships with new clients and now have a database of more than 7800 registered bidders.

“We’re excited by the prospect of the platform improving even further in 2021 and look forward to working with buyers and sellers to achieve further outstanding results,” Melmeth said.

CLICK HERE for the full results or to make an offer on a passed in lot.

CLICK HERE for the full Inglis Sales calendar for 2021.