There was something very familiar about the sight of a rich chestnut gelding in red silks with white cap loping to the front around the bend on a feature Saturday. After an impressive win last Saturday, Cherry Tortoni (Night Of Thunder {Ire}), a 3-year-old gelding out of a half-sister to Sandy Tait’s 13-time Group 1 winner Tie The Knot, has moved into second favouritism for the G1 VRC Derby. 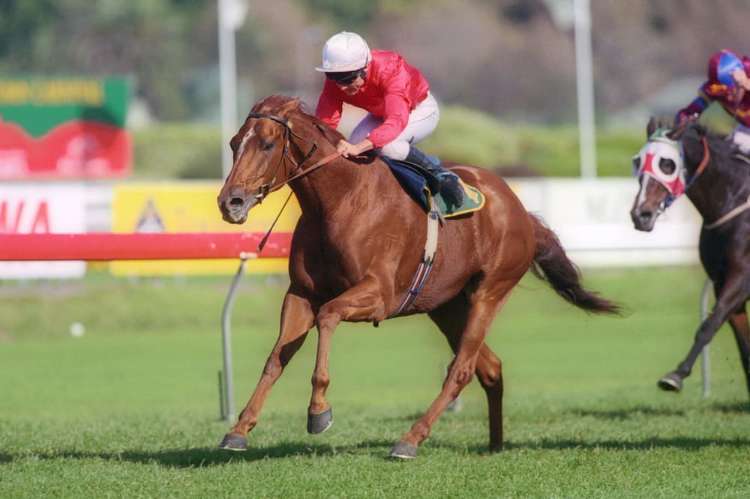 A win in the G2 Moonee Valley Vase on Saturday has put the Patrick Payne-trained Cherry Tortoni back firmly in frame of the G1 VRC Derby, a race in which he had previously been the standout favourite for.

The 3-year-old gelding became favourite for the Classic race after winning his third start in a row in the Listed Taj Rossi Series Final at Flemington on July 4. Returning for the spring with a third in the Listed Exford Plate before finishing second in the G2 Bill Stutt S., he finished seventh in the G1 Spring Champion S. at his final start before the Vase.

With the emergence of a number of talented Derby prospects throughout the spring, Cherry Tortoni drifted in the market but his Vase victory has seen him jump back to become the $5 second-favourite behind the untapped Danny O’Brien-trained gelding Young Werther (NZ) (Tavistock {NZ}).

“It was very exciting,” Tait told TDN AusNZ. “He won well and he had to make a long sustained run but he’s a pretty good horse I think.”

When asked how he thinks Cherry Tortoni will handle the step up in distance and in class in the Derby, Tait said: “That’s a question I couldn’t answer until we run in the Derby I would think, but I think he likes Flemington. He’s had two wins there so I think that’s really a plus.”

If his pedigree is anything to go by, the 2500 metres of the Derby should be no problem for Cherry Tortoni, as his second dam Whisked (Whiskey Road {USA}) – who herself finished second in a G1 VRC Oaks – also produced champion stayer Tie The Knot (Nassipour {USA}).

Tie The Knot was also bred and raced by Tait and he won 13 elite-level races, including the 3200 metre G1 Sydney Cup twice and the 2400 metre G1 Mercedes Classic twice as well finishing second in the 1997 VRC Derby.

Trainer Payne, a gifted jockey before weight forced him out of the saddle, rode Tie The Knot in three of those major race wins, including the gelding’s famous fourth consecutive Chipping Norton S. in 2002, the 21st and final race win of his career.

Cherry Tortoni could’ve been mistaken for his champion relation in the manner that he won on Saturday and while they are both chestnut by colour with white head markings, Tait confirmed that while they aren’t particularly similar on type, they share the same lethal turn of foot.

“He’s got a different build to Tie The Knot,” Tait said. “Tie The Knot was a more solid horse and he’s a big, rangier fella who is still growing I think.

“He’d be taller than Tie The Knot but he’s got a great turn of foot which Tie The Knot had. It was really fantastic to win the Moonee Valley Vase, it’s such a time-honoured race leading into the VRC Derby.

“It’s a hard race to know, there are always unknown factors and it’ll be a big field so you just don’t know until the Derby but he’s done everything right so hopefully we’ll press on and he’ll run a good race.”

Tait still breeds from Cherry Tortoni’s dam Tortoni (Strategic) but despite there being significant commercial value available for her future progeny off the back of the gelding’s success, Tait said there is no temptation to sell any of them while also detailing her future mating plans.

“We’re not into selling and we like to race them,” he said. “You never know but we’ve got them to race and rear them at home or at Olly’s (Tait, son) place at Twin Hills so it worked out well.

“This year she (Tortoni) is going to Too Darn Hot and he is a very attractive stallion for her I think. We’ve got a Churchill filly and she’s is just about to foal to Mendelssohn.

“I’ve always been keen on these international stallions because they stand at a much more reasonable fee. I think the Australian sprinting stallions, from my point of view, are too expensive.”

While Cherry Tortoni’s own sire Night Of Thunder (Ire) only shuttled to Australia for the one season in 2016, Tait hopes that Too Darn Hot (GB), who is a fellow son of champion Darley sire Dubawi (Ire), can produce another successful horse.

“Too Darn Hot could throw a classic type horse I think,” Tait said. “He was an incredible 2-year-old and up to a mile he was brilliant. Night Of Thunder is by Dubawi as well so it’s the same cross as Cherry Tortoni.

“It’s a pity that Night Of Thunder hasn’t come back out. He only did the one season and he had 58 progeny and they’ve been pretty exceptional, the ones that have run out here.

“For me, they’re more attractive stallions than the really commercial Australian ones because they’ve gotten very expensive.”

Having already been gelded, there is no stallion career ahead for Cherry Tortoni, and Tait said he is excited about what he might achieve throughout his career, flagging a possible tilt at next year’s G1 Cox Plate.

“There’s a lot of opportunities for him going on as a 3-year-old,” Tait said. “It gets more difficult when they’re a 4-year-old because of all the imports that come into the country.

“The Cox Plate is the obvious one. If you’re here and you’ve got a good horse, that’s the one you go for and he’s got good form around Moonee Valley now.”